Despite common perception, Weather events have not increased over time… but observation & recording have.

(If a tornado happens on a lonely prairie, and no one video’s it, did it happen?)

We are constantly told that burning fossil fuels is causing drought in California: e.g. –

“Human-caused climate change helped fuel the current California drought, says a Stanford University study.  Climate change has increased the chance that the two main weather conditions that led to the drought will occur at the same time, the study shows.”

But when you look at the historical data

Maybe having 39,309,017 people (who consume 38 billion gals of water/day) in a semi desert area, may have something to do with it.

Complete listing from 1616 (a lot of cold winters)
http://www.netweather.tv/index.cgi?action=winter-history;sess=
http://booty.org.uk/booty.weather/climate/histclimat.htm 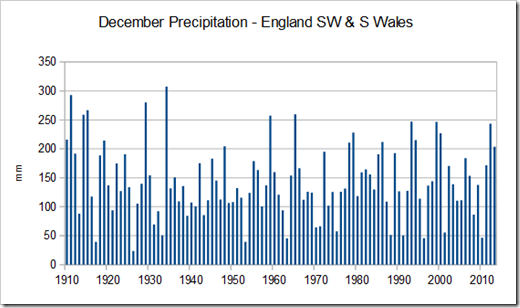 Over the last few years the UK has been subjected to a number of major flooding events; we are told these are ‘unprecedented’ & due to ‘global warming’.

Human induced, CO2 driven catastrophic global warming / climate change (according to Warmists) only started in the
1980s;
So in that case, what caused these ?? – British Pathe films about flooding, between 1910 and 1969. http://www.britishpathe.com/workspaces/gaelle/PfZQgWrQ

York floods, Xmas 2015 reported as ‘unprecedented’ at 5.2m.: but in 2000 it was 5.4 & 1625 they had 11m.
The river Ouse caries millions of tons of silt & gravel every year, but the Environment Agency (EA) has cut the amount of dredging in the area over the last 10 years, reducing the capacity of the river to cope with any sustained rainfall.
The Foss flood barrier failed on Boxing Day because the EA had put all the electrical gear BELOW known flood levels. !!
http://coolgeography.co.uk/A-level/AQA/Year%2012/Rivers_Floods/Flooding/York%20Flooding.htm You couldn’t make it up.

The Somerset levels 2014 ~ 65 km² was submerged because of high, but NOT exceptional (see precipitation chart ?) rainfall, coupled with 20 years of the Environment Agency refusing to dredge the rivers Cary, Yeo, Tone & Parrett, arguing that it is ‘anti-environmental’ !!

In 1919, 280 km² was submerged, but that was a saltwater storm surge coupled with reduction of dredging in the First World War.

The draining of the Somerset levels – https://books.google.co.uk/books?id=fQs9AAAAIAAJ&pg=PA271&dq=Somerset+levels++flood+history

Interesting bit of info here – https://sites.google.com/site/moonrakinimages/rof-pumps (I haven’t verified it yet, but it sounds about right)
History of The Somerset levels – http://www.british-history.ac.uk/vch/som/vol8/pp1-7 & https://en.wikipedia.org/wiki/Somerset_Levels#Flooding

In 1607 a major storm in Somerset swept away villages down the Bristol Channel killing approx. 2,000 people (a high % of the local population). http://www.burnham-on-sea.com/1607-flood.shtml Download full paper here – http://ro.uow.edu.au/scipapers/94/

500 year old Tyne Bridge in Newcastle collapsed from a massive flood, 12feet above high water (in 1771).

Catastrophic floods & high rainfall are nothing new, and there is no evidence that “climate change” had anything to do with any of the above, they are just extreme weather events.

List of natural disasters in Great Britain and Ireland – https://en.wikipedia.org/wiki/List_of_natural_disasters_in_Great_Britain_and_Ireland

The 10 worst British winters ever …. (1684 was the clear winner).
http://www.independent.co.uk/news/uk/home-news/the-10-worst-british-winters-ever-8945584.html?action=gallery#gallery

Finally: – Here’s an example of the two, most dreadful British Winters of the 20th century.

( & It’s worse than you could ever imagine https://www.youtube.com/watch?v=XaVrZRJfTBE …You have been warned !!)