‘To the naked eye, our sun is an unremarkable ball of heat and light. Under the eye of the Solar Dynamics Observatory, the sun is a seething maelstrom of magnetic phenomena, coronal mass ejections, sunspots, and solar flares’ https://www.youtube.com/watch?v=lpzCSZ7Eerc
Earth is about the size of an average sunspot! https://weathercycles.wordpress.com/timo-niroma/ & https://www.flickr.com/photos/roncottrell/14809056583/

The sun has no influence on climate !! “the warming in the last 20 to 40 years can’t have been caused by solar activity,” said Dr Piers Forster from Leeds University,” http://news.bbc.co.uk/1/hi/sci/tech/6290228.stm

That’s not science….that’s stupidity. Why is it hot in the tropics & cold at the poles ?….It’s the sun, stupid.

The Sun heats the Earth; when its radiation increases, the Earth warms, when the radiation falls, Earth cools.

• The earths surface is a giant solar energy collector, any fluctuations in solar output have significant consequences for us.
In absolute terms 0.1% variation in solar power corresponds – on striking the earth – to 0.174 petawatts (PW) of incoming solar radiation. That is to say 174,000 gigawatts.

To put it in perspective, current total world energy consumption is only around 3,500 gigawatts.

https://en.wikipedia.org/wiki/World_energy_consumption In 2012, the IEA estimated that the annual world energy consumption was 155,505 terawatt-hour (TWh),

The coolest periods on the planet recently have been:

How much of a coincidence is it that these are also the periods of lowest solar activity ??

Wonderful photos of Sun with spots & flares with Earth for scale – https://www.flickr.com/photos/roncottrell/page1

Planetary influences on the sun – http://www.landscheidt.info/

The Sun has got his balaclava on !!

Solar Cycles, [nothing to do with electric bikes] are ~ 11yrs

The next Grand Solar minimum appears to be imminent possibly within our life time!

See what the Dalton & Maunder Solar minimums did to us !!

The sun undergoes cyclical changes that appear to correlate with earth temperatures. Cycle 23 appears to be the longest in at least a century and may point to quieter subsequent cycles and cooling temperatures ahead. 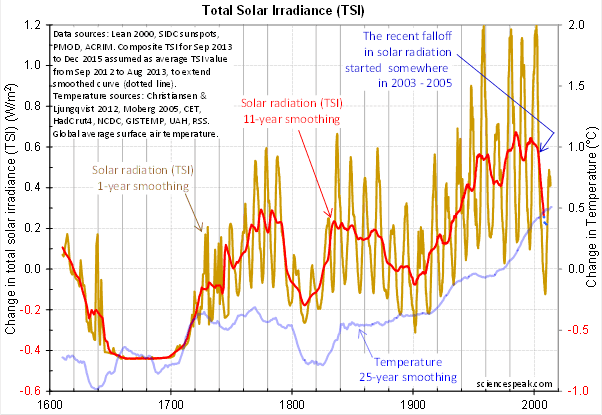 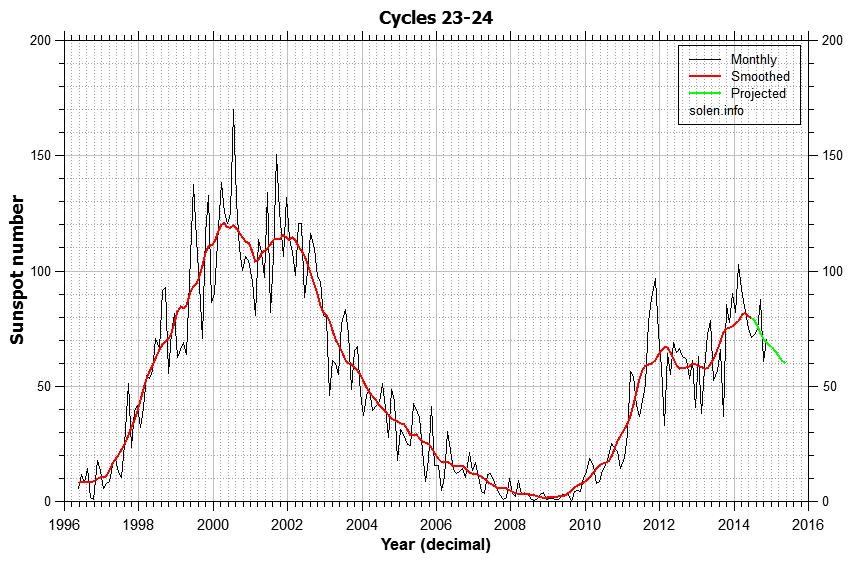 Dec. 21, 2006: Evidence is mounting: the next solar cycle is going to be a big one.
Solar cycle 24, due to peak in 2010 or 2011 “looks like its going to be one of the most intense cycles since record-keeping began almost 400 years ago,” says solar physicist David Hathaway of the Marshall Space Flight Center. https://science.nasa.gov/science-news/science-at-nasa/2006/21dec_cycle24/

Two cycles of declining sunspot activity suggest a possible cooling trend.
► A longer solar cycle predicts lower temperatures during the next cycle.
► A 1 °C or more temperature drop is predicted 2009–2020 for certain locations.
► Solar activity may have contributed 40% or more to the last century temperature increase.
► A lag of 11 years gives maximum correlation between solar cycle length and temperature. http://www.sciencedirect.com/science/article/pii/S1364682612000417

Also, this recent article by David Hathaway of NASA Ames sums up the current theory of the solar cycle and is easy reading.
https://link.springer.com/article/10.1007/lrsp-2015-4/fulltext.html

• In a solar eclipse, the air temperature can drop 10 °C in a few minutes & the CO2 in the atmosphere doesn’t do didily-squat to stop the heat loss.

If it’s cloudy you don’t see the eclipse it just gets dark, but temperature remains the same, therefore water vapor is the controlling factor, NOT CO2. QED.