If you tell a big enough lie, often enough, people will eventually believe it. – Joseph Goebbels

1. Not so long ago there was consensus that-

2. Consensus is political methodology; it’s NOT the scientific way, which is only based on facts & data.

“In questions of science, the authority of a thousand is not worth the humble reasoning of a single individual.” Galileo:

97% of all political dictators win ‘elections’ by 97%
97% of 225 women agree that…… (look in any beauty advert)
97% of Women Will Be Cruel to Their Bodies Today (advert for beauty treatment)
97% of female executives are ‘athletic’
97% of Republicans and Democrats Agree on One Major Issue
97% of Welsh Women ‘Paint On’ Missing Toenails On Their Little Toes
97% of Apple Watch buyers satisfied, says survey
Condoms are only 97% effective
97% of train carriages are recycled
97% of our currency owned by the major banks
Flu jabs ‘almost useless’ for 97% of people
97% of foods contain pesticide residue
97 per cent of folks in Britain are able to get at least basic broadband
97% of neo-nazi’s believe they are superior to black people
97% of Black Panthers agree to the fact that they are superior to white people
97% of paranoid believe they are being followed
97% of homoeopaths believe in homoeopathy
97% of the KKK think lynchmobs are a good thing
97% of the intelligent design gang are absolutely convinced that God made it all
97% of all the interviewed Zen budists were convinced it is possible to clap with one hand
97% of the paganist movement think sandals are fashionable
97% of physicians didn’t believe in washing their hands before doing surgery
97% of politicians think they are doing  great things

Short history of the ‘97% ‘consensus on anthropogenic global warming’

In 1992, former Vice President Al Gore reassured his listeners, that “Only an insignificant fraction of scientists deny the global warming crisis. The time for debate is over. The science is settled.”

This has been quoted ad infinitum by politicians & hack journalists.

17 years later, in 2009, Gore said the scientific debate (over the ‘settled science’) of human-induced climate change had raged until 2009, but claimed there was a now a 97% consensus’. (Thankfully real scientists continue to look for real scientific facts)

As we know from our daily lives to get a consensus on anything is unusual, so to get 97% is remarkable.

To get 97% 4 times from different data sets is unbelievable …really…it’s unbelievable !! So that data needs investigation, lets just look at the figures from the – Doran & Zimmerman (2009) & Cook et al. (2013) studies.

How the figures were fixed

The American Geophysical Union (AGU) is a nonprofit organization of geophysicists, consisting of over 61,000 members from over 146 countries.

An online poll was performed by Doran & Zimmerman (University of Illinois) in a cherry picking exercise –
From the 61,000 AGU earth scientists, they solicited 10,257. ( The other 50,000, that were known to be critical of the AGW theory, including: solar scientists, space scientists, cosmologists, physicists, meteorologists and astronomers, were excluded !! ) Of the 10,257 only 3,146 replied.

3,069 of those respondents (97.5%) were then also excluded after the responses were received (deemed unsuitable, because they didn’t positively support AGW or were neutral !!)…

… leaving just 77 scientists who were then asked 2 questions. [The 77 were chosen (after ranking by number of papers written) accepting ONLY those who were in government-paid positions. NO private employed or retired scientists were allowed.] The first question asked respondents to compare current temperatures to the pre-1800s, (the depths of the Little Ice Age), and asked whether it’s warmer now.!!

The second question** asked “Do you think human activity is a significant contributing factor in changing mean global temperatures?”

Doran & Zimmerman then chose to highlight the views of that subgroup of 77 scientists, 75 of whom thought humans contributed to climate change.
[ So…. not an unbiased survey OR a large and broad group ]

The data states only 2.38 % AGU members actually agree Global Warming is manmade …
… But the figures suggest it’s possibly less than 1%,

More on the Doran and Kendall Zimmerman, 2009 study here-
http://wattsupwiththat.com/2012/07/18/about-that-overwhelming-98-number-of-scientists-consensus/

Conclusion: at best, the Doran and Kendall Zimmerman, 2009 study data states –
only 2.38 % of AGU members agree Global Warming is manmade, although the figures suggest it’s less than 1%… hardly a 97% consensus !!

That’s like surveying medical professionals about the efficacy of homeopathy, and then, after you get the responses back, excluding all the responses… except those from practicing homeopaths.

This graph says it all about the 97% con-sensus – 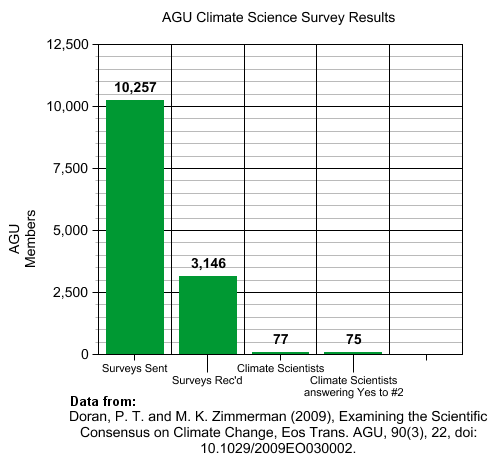 So 75 carefully selected people are the basis of the ‘97% consensus’ on man-made CO2 driven global warming;

“There is no convincing scientific evidence that human release of carbon dioxide, methane, or other greenhouse gases is causing or will, in the foreseeable future, cause catastrophic heating of the Earth’s atmosphere and disruption of the Earth’s climate.

Moreover, there is substantial scientific evidence that increases in atmospheric carbon dioxide produce many beneficial effects upon the natural plant and animal environments of the Earth.”

If you really believe consensus has a place in science, then you have to go with the 31,487 scientists, NOT just 75.

This is the fraudulent ‘study’ by the Australian  cartoonist John Cook, (who likes dressing up as a Nazi officer http://www.populartechnology.net/2012/03/truth-about-skeptical-science.html )

In March of 2012, the climate alarmist website Skeptical Science had their forums “hacked” and the contents posted online. In a forum thread titled, “Introduction to TCP” (2012-01-19) John Cook laid out the game plan for the 97% consensus study, Cook et al. (2013) http://www.populartechnology.net/2013/06/cooks-97-consensus-study-game-plan.html
Showing they had determined the outcome BEFORE doing the study !!

Conclusion: The Cook et al. (2013) study is so obviously littered with falsely classified papers making its conclusions baseless and its promotion by those in the media misleading.

97% Study Falsely Classifies Scientists’ Papers, according to the scientists that published them

“Cook et al. may have reverse engineered their paper. That is, perhaps the authors started by deciding the “answer” they wanted (97 percent) based on previous alarmist studies on the subject. They certainly had strong motivation to come up with this “answer” given the huge propaganda investment by alarmists in this particular number.”
http://www.populartechnology.net/2013/05/97-study-falsely-classifies-scientists.html

Some more examples of J Cooks falsifications, from the authors of the papers Cook surveyed…

“the Cook survey included 10 of my 122 eligible papers. 5/10 were rated incorrectly. 4/5 were rated as endorse rather than neutral.” – Richard Tol ?@RichardTol
http://wattsupwiththat.com/2013/05/21/cooks-97-consensus-study-falsely-classifies-scientists-papers-according-to-the-scientists-that-published-them/      See also – http://www.sealevel.info/97pct/

The other studies also have similar rigged data. No space here to elucidate further.

The consensus is… there is no consensus & even the IPCC have changed their minds.

Any time someone brings up Cook or Powell or Lewandosky or Connelley’s consensus nonsense, show them this:-

The “97 percent” claim also ignores 60 scientists who published a document in 2006 lambasting the theory of AGW. And it ignores the international panel of more than 700 prominent scientists on the December 2007 Senate report. This group of climatologists, geologists, oceanographers, biologists, glaciologists, biogeographers, meteorologists, economists, chemists, environmental scientists, physicists, paleo-climatologists and other scientists signed a letter saying climate change was a well-known natural phenomenon.
Many of them were current or former members of the IPCC.

Nor does the ‘consensus’ include the 31,000 scientists who have signed this petition AGAINST the alarmism of global warming. http://www.petitionproject.org/

Lawyers in the pacific are increasing global warming in California

A 4 yr in-depth study has shown with 96.9% correlation that falling numbers of lawyers in the Northern Mariana Islands coincides with an increase of solar intensity in California that could force a climatic tipping point. See chart – http://www.tylervigen.com/view_correlation?id=3030

Even the BBC now suggests you follow Tyler Vigen’s tips to make sure the statistical wool isn’t being pulled over your eyes? http://www.bbc.co.uk/news/magazine-27537142
Something to bear in mind next time a sensational headline catches your eye.

Other mad claims supported by ‘figures’

Nicolas Cage cuts US helicopter deaths by 44% in one year !!

On the subject of polls & surveys

For any poll result to be taken seriously one has to know:

Walk into any room and ask everybody if they would rather die now or on their 65th birthday. It is extremely likely that almost everybody will pick the 65th birthday option. From this survey you can then safely conclude that nobody wishes to live past 65.

Greens were asked if a chemical called Dihydrogen Monoxide (DHMO), should be banned as it is widely used in industry, is a major component of acid rain, routinely finds its way into rivers and watercourses and accidental inhalation frequently kills people. About 80% said it should be banned. https://www.youtube.com/watch?v=jAI1JAYj53k & https://www.youtube.com/watch?v=yi3erdgVVTw

Which would make life very difficult indeed as it is just…H2O… water.

How to skew an opinion survey-

Sir Humphrey Appleby demonstrates the use of leading questions to skew an opinion survey to support or oppose National Service http://www.youtube.com/watch?v=G0ZZJXw4MTA