Skip to content
« Previous pageNext page »
1969, Lubos Moti, Czech physicist: “It is now pretty clearly agreed that CO2 content [in the atmosphere] will rise 25% by 2000. This could increase the average temperature near the earth’s surface by 7 degrees Fahrenheit. This in turn could raise the level of the sea by 10 feet. Goodbye New York. Goodbye Washington, for that matter.”

‘Bangladesh slipping into the sea’

But when you look into it, surprisingly, Bangladesh is actually gaining more land area than its losing.

Bangladesh’s main problems are not climate,  they starts with the lasting legacy of the British  Partition of India in 1947 (look to your history books), it’s population is growing faster than the land is accruing & forests are being cut in the foothills, increasing flooding from the monsoons.

March 29, 2001, CNN: “In ten year’s time, most of the low-lying atolls surrounding Tuvalu’s nine islands in the South Pacific Ocean will be submerged under water as global warming rises sea levels.”

But by 2015 the Atolls were almost unaltered, the observed sea level rise since 2001 = 4.2mm, although the island IS sinking at a greater rate see http://www.legos.obs-mip.fr/members/delcroix/publis-pdf/Becker_etal_GPC12.pdf?lang=en
[Using GPS precise positioning, these authors clearly demonstrate that during the past ~two decades, earthquake-related vertical land motion led to large subsidence (of about – 10mm/yr). Also the coral base of the atoll was dug up & used as fill to create the airport runway, producing instability.]

“There is presently no evidence that these islands are going to sink,” Virginie Duvat – University of La Rochelle. 2015

Absolute measured global sea level rise is just 1.7-1.8 **millimeters/year. ~ 180mm (7inch)/ century.
https://web.archive.org/web/20150910050658/http://www.tidesandcurrents.noaa.gov/sltrends/globalregional.htm 10/9/15 Had to use the waybackmachine because NOAA just made it disappear in mid Sept, ahead of COP 21 & replaced it with http://climate.nasa.gov/vital-signs/sea-level/ inaccurate satellite data that doesn’t match the tide gauges,
See – https://stevengoddard.wordpress.com/2015/12/06/nasa-sea-level-fraud/ & Data Tampering

Table 10.7 from the IPCC’s AR4 report – https://www.ipcc.ch/publications_and_data/ar4/wg1/en/ch10s10-6-5.html – tells us that in ALL scenarios Antarctica contributes negatively to sea level rise, because of increased snow & ice formation. 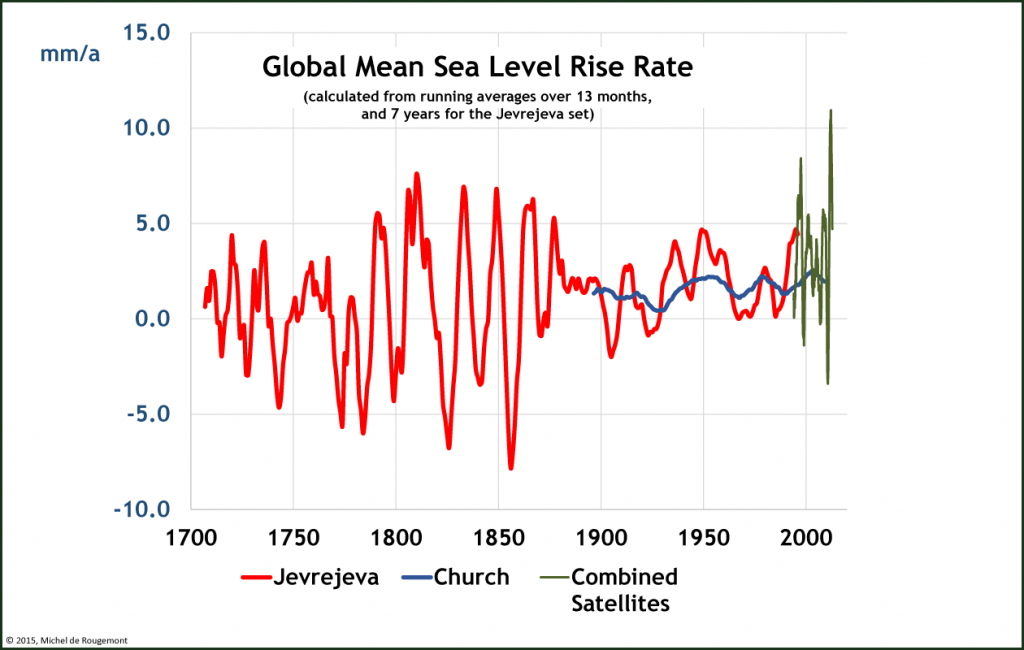 Source: John A. Church, Neil J. White, “Sea-Level Rise from the Late 19th to the Early 21st Century”, Surveys in Geophysics, Volume 32, Issue 4-5 , pp 585-602
and Jevrejeva, S., J. C. Moore, A. Grinsted, and P. L. Woodworth, “Recent global sea level acceleration started over 200 years ago?” (2008), Geophys. Res. Lett., 35
Satellites : Combined TOPEX/Poseidon, Jason-1 and Jason-2/OSTM
The coefficient of correlation R2 for the Jevrejeva series is 0.0555, which indicates that nothing is statistically significant to determine an acceleration of the rate of rise over a long period of time.