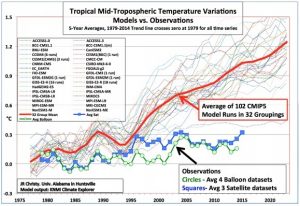 It’s hard enough to accurately model a simple system unless you have full control of all parameters.

The climate is a complex & chaotic system with many parameters, most we don’t fully understand & none of which we can control; there may also be parameters we don’t even know about yet.

Digital computers have severe limitations, they ALL use the same canned sub-routines & so far the models are unable to deal with: clouds, solar variations, cosmic rays, orbital eccentricity & planetary gravitational influences, all of which are known to have profound effects on climate.

The computer global climate models do not model night-time, just daylight 24/7, over the whole globe !!!!

It is during the real-world’s night-time that these radiative gases actively convert heat energy in the air to IR radiation which is then lost to space. This is why the air cools so rapidly after sunset and little breezes kick up so quickly near the shadows of clouds on a sunny day with scudding clouds. This is a rapid process and completely missing from the computer models

We have difficulties in the construction of the models themselves before considering the numerical calculation difficulties. Then we have the problem that the underlining physics may well be wrong.

The current climate models are worthless. They are an exercise in futility as far as science goes, but are wonderful at making the IPCC look “scientific” to the layman.

Sadly no one is willing to lose face (& their career) & admit they should start again with the correct parameters, so the Garbage In=Garbage Out continues.

Predictions by ‘climate scientists’ (Never make predictions…especially about the future !!)

8 November 2011 “His [model] is the most extreme but he is also the best modeler around.

“It is really showing the fall-off in ice volume is so fast that it is going to bring us to zero very quickly. 2015 is a very serious prediction and I think I am pretty much persuaded that that’s when it will happen.”

Daily Telegraph – http://www.telegraph.co.uk/news/earth/environment/globalwarming/8877491/Arctic-sea-ice-to-melt-by-2015.html
• Arctic expert predicts final collapse of sea ice within four years
“This collapse, I predicted would occur in 2015-16 at which time the summer Arctic (August to September) would become ice-free. The final collapse towards that state is now happening and will probably be complete by those dates”. – Guardian – https://www.theguardian.com/environment/2012/sep/17/arctic-collapse-sea-ice

“It could even be this year or next year but not later than 2015 there won’t be any ice in the Arctic in the summer,” Financial Times Magazine – 2 August 2013

How good where those predictions ??? see the Ice page.

“Within a few years winter snowfall will become a very rare and exciting event. … Children just aren’t going to know what snow is.” 20 March 2000
& in 2006 – “Climate change could “dramatically” change the face of British tourism in the next 20 years, with European tourists flocking to the UK to escape unbearably hot continental summers.”
David Viner, Climatic Research Unit, University of East Anglia,

2012 “Drought may be the new norm for the UK” Caroline Spelman secretary of state for environment, food & rural affairs

We were told in the early 1960’s we would run out food, with mass famines even in developed countries predicted by 1970 with 65 million people in the USA dying of starvation and the UK ceasing to exist.

In the late 1960’s we were told that world reserves of oil and gas would be gone by 1980, now we are swilling in the stuff, they tell us we must leave these dangerous resources in the ground.

In the 1970’s we were assured by ‘climate scientists’ that unless we stopped burning fossil fuels a new ice age caused by global cooling would doom us all in the next decade. ( Now the same ‘climate scientists’ say – that unless we stop burning fossil fuels global warming will doom us all in the next few decades )

In the 1980’s we were assured that global temperatures would rise 2 degrees C by 2010- that didn’t happen !

At the end of the 1990’s ‘climate scientists’ said we should close all the ski resorts in Scotland and that our children would not know what snow looked like. Cue record snow seasons in Scotland in recent years.

They also told us to expect prolonged droughts in the UK and that we should dig up our flower beds and lawns and plant cacti – what we actually got was wet summers and flooding.

Note that many of the ‘experts’ who wrote such appalling forecasts are still issuing confident predictions for the future and now demanding we give them billions (of $ £ € or any currency they can lay their hands on), to prevent them coming true.

Since they made that brilliant forecast…..California wine sales are up 36% ( notice the ‘could’ word again ) 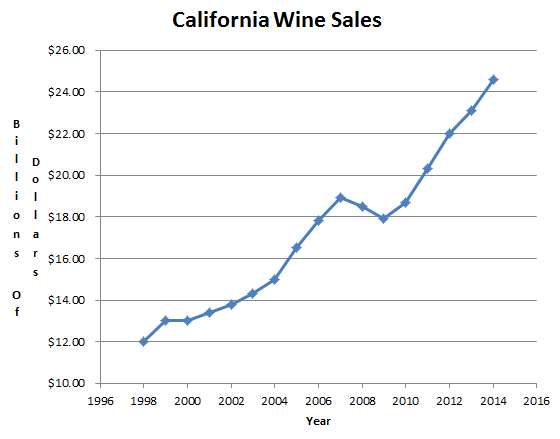 Why are ALL the models wrong ?

…Garbage In = Garbage Out.