Britain has some of the worlds longest running continuous weather records in the world, known as the  Central England Temperature series (CET)  started in 1659 & held by the Met Office..

The Medieval Warming from 800 to 1300 AD (that Michael Mann erased to make his “hockey stick” chart work), was several degrees warmer than anything “global warmers” fear. It was the longest recorded time (500 years) of relative peace, and brought great abundance for all.

The TV & newspapers tell us constantly that each year is the (hottest, coldest, driest, or wettest) !!

All the monthly averages from 1659-2017 from the Central England temperature set (CET)
http://www.metoffice.gov.uk/hadobs/hadcet/mly_cet_max_sort.txt

BUT what difference 5 years of extra observation makes: the last few summers have cooled 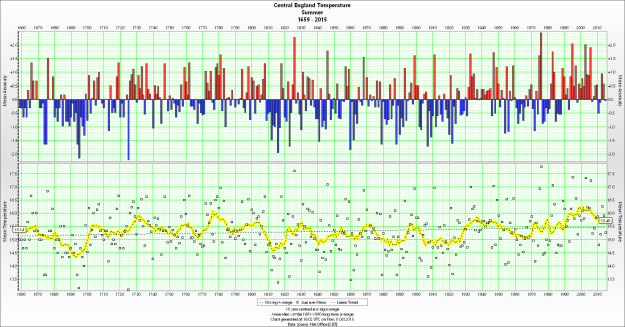 Even with the continued increase in CO2 & all the dire predictions of British summers being like southern Spain, we’ve warmed only +0.6°C in 357 yrs (1659).

We are still 2°C colder than when the Romans were here; and sadly there has been NO global warming for the last 18 yrs. See – https://wattsupwiththat.files.wordpress.com/2014/03/clip_image004_thumb7.png

So maybe the science isn’t settled & CO2 isn’t the bogyman after all.

But there are a few problems with data collection-

Have a look at this PDF which explains what sites make up CET:
http://www.metoffice.gov.uk/hadobs/hadcet/Parker_etalIJOC1992_dailyCET.pdf

You will note that many of them that used to be in the countryside are now in built-up urban area’s so are also recording heat emanating from buildings, traffic etc, resulting in ‘The Heat Island Effect’

I know the one at Weston Park in Sheffield (Google Maps).

They use the large tarmac area 10m to the left to land the air ambulances, often there is an Ice cream van parked at the gateway with its engine running 20m away (you can see it in the sat view); so lots of false heat sources.

How meaningful can it be to compare current & historical measurements??

Heathrow (where they recorded the hottest day ever…just as 87 plane movements happened in that hr, near the recording station , situated at the eastern end of the north runway [ just where engines were on max thrust for take off ] & next to a road & car-parks. The prevailing wind is from the southwest, so blew hot gasses over the thermometers.)

Another 178 UK Met stations, to be Class 1 they need to be 100m from any buildings concrete surfaces, and parking lots; you can check how good they are here – https://tallbloke.wordpress.com/index-page-surface-stations-project/

Only 7.9% of NOAA temperature stations are accurate to less than 1C

Yet NOAA claims precision of global temperature estimate to 0.01C.

(How do you get precision 200x the accuracy of the measuring instrument…. without lying ??) 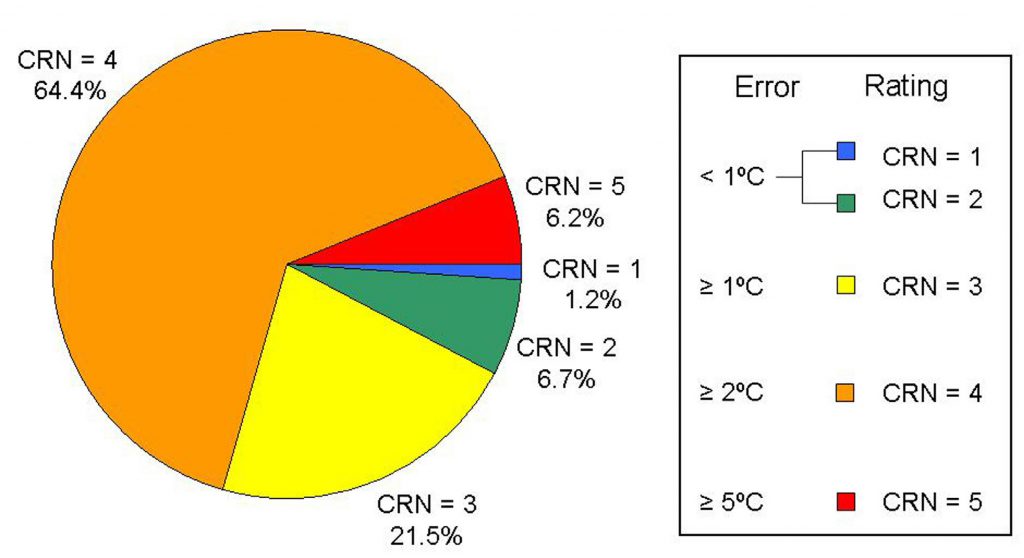